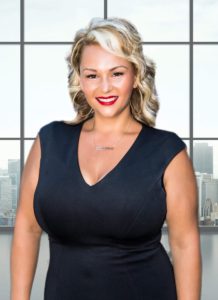 Alla Mayzel was born in Tashkent, Uzbekistan, and immigrated to the United States with her family when she was four years old, settling in the State of New Jersey. She attended Rutgers University where she earned a Bachelor of Arts degree in Criminal Justice. After graduating from Rutgers in May 2009, she worked at the Newark Police Department in the Policy and Planning Office. Deciding to follow in her Mom Isabella’s footsteps, Alla received her Juris Doctorate from Widener University School of Law in Harrisburg, Pennsylvania in May 2013.

While at Widener, Alla was a successful Trial Advocate with the Trial Advocacy Honor Society and competed in numerous competitions. In her last year at Widener, Alla was elected as the President of the Trial Advocacy Honor Society. She competed in the National Trial Competition in Philadelphia, Pennsylvania two years in a row and was the Champion of the Hugh B. Pearce Internal Trial Competition at Widener University – Harrisburg. During her law school years, Alla interned at the Dauphin County Public Defender’s Office in Harrisburg, Pennsylvania. After graduating, Alla also worked with the York County Public Defender’s Office in 2014; at that time, she conducted numerous suppression hearings, one felony bench trial, and argued before Judges in criminal cases on dozens of matters.

Alla has been working at the Mayzel Law Group since August of 2014 and handles a wide variety of Immigration matters as well as leading the Criminal Justice division of the firm. Alla is licensed to practice law in Pennsylvania, New Jersey, and in the United States District Court of New Jersey. She lives in Union County with her husband, Corey Dietz, a Personal Injury attorney, and their cute boxer Winston.